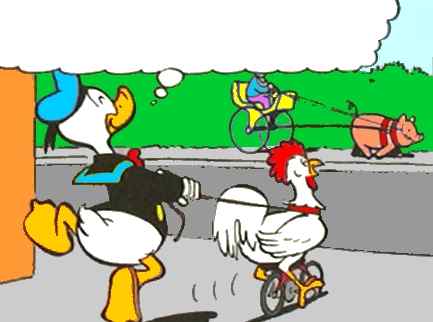 This one was pretty weird, because for a long time they told me I was going to be riding the tiny bicycle. It turned out they were joking, they all laughed pretty hard when I tried to ride it. They actually had it custom-made for the chicken, I think it was part of the contract that her props would have to be custom-made.

They wanted me to dance more, like I was whistling, which is impossible when you think about it. It turned out they just wanted those three little motion lines to show up in the final prints, it costs a lot to add those in afterward. I still think they should have been asking the chicken to do that but she was kind of a jerk.